Shut down the next day 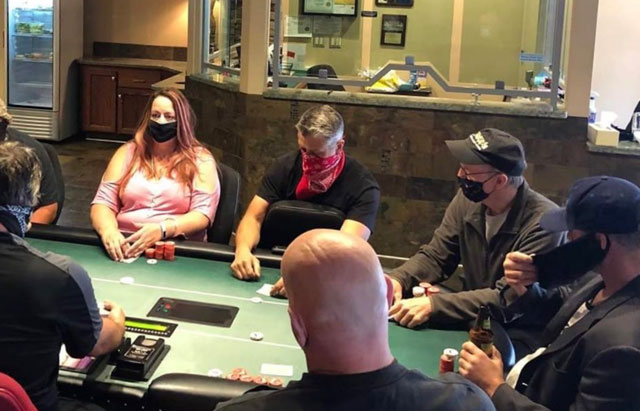 The Towers Casino in Grass Valley, California was open for card games on Monday despite the state order forbidding them from doing so. The very next day, California Governor Gavin Newsom issued an order for the venue to shut down its operations, according to the facility’s employees.

GRASS VALLEY (CBS13) — The Towers Casino and Card Room in Nevada County says six Department of Justice agents shut them down Tuesday night for violating the state’s public health order. Owner Jamey Robinson says there was no indication from Nevada County Department of Public Health or local law enforcement that she was doing anything wrong.

It is unclear if further action will be taken by the authorities against the owners of this casino.

In the six-table poker room, there were three tables open for cash games. The Monday reopening of the card room was announced through the casino’s social media, with an image of one of its games making its way onto Twitter:

While California’s Nevada County was given approval to move more quickly through phase two of the state’s reopening plans, the permission does not cover casinos such as Towers Casino. Thus, the reason for the forced closure.

Phase two only covers malls, dine-in restaurants, and child care centers once certain guidelines are followed. There are four phases in total as part of the state’s reopening plan, with the likes of card rooms and casinos able to open in phase three. There is no clear indication yet of when phase three will be launched.

Towers Casino is not a tribal facility and is licensed by the California Gambling Control Commission. Therefore, it must adhere to the rules of the Department of Justice’s Bureau of Gambling Control.

There are some tribal casinos in the state that are ready to open for business. Governor Newsom urged these tribal facilities to remain closed, but acknowledged that they do have the right to open. This is because they are on sovereign land, making them exempt from local and state government orders.

Most tribal facilities are planning to stay closed until June. Three casinos, however, are all reopening this week. The Viejas Casino and Resort opened on Monday, the Sycuan Casino Resort welcomed customers on Wednesday, and the Valley View Casino will open up on Friday.

While Towers Casino has posted signs informing patrons of sanitizing policies and it is evident in the above photo that the players are all wearing masks, it does not appear that there was much social distancing at the poker table.

Some locals were happy that the facility had reopened. Kindra Nelson told Sacramento’s CBS13:

I’d feel safe going anywhere and if I don’t I’d wear a mask and gloves.”

As per the Towers Casino website, all workers are to follow strict health and safety guidelines. This includes sanitizing all chips once they have been cashed in, as well as regularly sanitizing cup holders and the railings of the table games after each person has left the table.

Major casino companies have been publishing their own extensive health and safety plans for reopening. MGM Resorts International, for instance, has a seven-point plan, and both Las Vegas Sands and Caesars Entertainment have also released their new protocols in recent weeks.

A California casino was shut down by the governor for violating the state’s lockdown order just a day after it reopened. The Towers Casino in Grass Valley excitedly announced on its Facebook page that it was open on Monday after being closed for two months. Poker pot committed. Unfortunately for the casino, it was not supposed to do so and it was forced to shutter once again.

Grass Valley is in Nevada County, about 56 miles northeast of Sacramento. Nevada County does have the state government’s approval to speed up phase 2 of Calfornia’s plan to modify the stay-at-home order, but that applies to restaurants, malls, and childcare facilities, not casinos. Casinos come in the next phase.

Thus, the shutdown order from Governor Gavin Newsom on Towers Casino’s second day back in operation.

The casino emphasized that it was taking strict safety precautions to keep customers and staff safe. There is a sign on the door telling patrons to wash their hands before they play. Employees have also been instructed to sanitize chips after they are exchanged at the cashier, sanitize cup holders after every use, and wipe down table rails whenever a person leaves.

Three of the casino’s six poker tables were in use for cash games. As can be seen in the pictures the casino posted on Facebook, players did don face coverings, from surgical-type masks to cloth masks to bandanas. It does not appear that anyone, including the poker dealer, was wearing gloves.

Governor Newsom has been battling to try to get people and businesses to adhere to California’s COVID-19 pandemic safety rules. As we reported Tuesday, he has been having some trouble with Native American-operated casinos. While the governor does have the authority to force a venue like Towers Casino to stay closed, he does not have that same pull with tribal casinos. Because their casinos are on sovereign land, they are do not fall under state regulatory control.

Most tribal casinos in California are waiting until at least June 1 to reopen, but three have opened or plan to open this week. Viejas Casino & Resort and Sycuan Casino Resort have already welcomed back gamblers and Valley View Casino is set to open back up on Friday.

All Governor Newsom can do is ask them to stay closed. He can’t make them.

“I understand that some tribal governments are planning on reopening casinos on their lands,” Newsom wrote in a letter to the tribes on Friday. “This deeply concerns me, and I urge tribal governments to reconsider and instead make those determinations based on how they align with the current local public health conditions and the statewide stage of reopening.”

“….in the spirit of sovereign-to-sovereign engagement I respectfully request that until a surrounding or neighboring local jurisdiction has legally progressed into Stage 3, your tribal casinos remain closed,” he said.

While it remains to be seen if reopening any casinos, be they tribal or commercial, is a good idea, the three California casinos are at least implementing safety policies and are not running at full capacity.