Speckled Trout are the most widely caught game fish in the Texas Coastal Bend. They are caught from boats, by waders, from the shore and from piers. The methods used to target speckled trout are just a varied as the type of angler pursuing them. The popularity of speckled trout stems from their abundance and quality meat. Adding to this is their willingness to hit both natural and artificial baits and their year round availability.

If you are going trout fishing in Texas, it will be important to understand where the best places for trout fishing in Texas are. It is better to have several fishing spots where you know speckled trout inhabit that having only one spot. Having a variety of spots will increase your chances of bagging a prize trout.

Generally speaking, fish shallow early and late in the day and fish adjacent channels, holes and drop offs in the middle of the day most of the year. During late fall, winter and exceptionally cold snaps, fish deep water in marinas, deep channels and the deepest holes in flats areas. During moderate weather and overcast days, stay on shallow flats and reefs longer. During cooler months, trout may move up a little later in the morning and earlier in the afternoon or may just stay in the deeper parts of the bays.

If you are in the right water at the right time of day and still not catching, vary your bait. Different size trout will eat differently, with smaller trout eating shrimp and small fish, while larger trout eat only larger fish. It may just be that you are fishing for the wrong size trout!

Locating speckled trout in the bays of the Texas Coastal Bend is relatively easy. They are widely distributed throughout the bay systems and tend to be aggressive feeders. The real challenge is identifying the habitat and finding populations of the size of speckled trout that you want and using the correct bait and location for that size fish during that season.

During warm spring and summer months, speckled trout will use the filtered light of the early morning and late afternoon to move into the shallow areas of grass flats, oyster reefs and grassy shorelines to ambush prey. Speckled trout are aggressively feeding at these times and good size catches are common.

As the day heats up and the sun gets more direct, speckled trout will slide off the shallow areas into deeper adjacent waters. Target deep cuts, drop offs to the bay along grassy shorelines and channels near flats or oyster reefs. Three to five feet of water is often productive. On cloudy days or more moderate temperatures, speckled trout may remain in the rich shallower waters for extended periods.

During colder months, especially following a significant drop in temperatures due to a cold front, speckled trout will move into deep holes such as harbors, channels and estuarial rivers or out to the Gulf of Mexico to help regulate their body temperature. These cold “snaps” funnel a large population of speckled trout that are normally distributed over large bays systems into a limited number of deep water refuges and can create an opportunity for fast action. 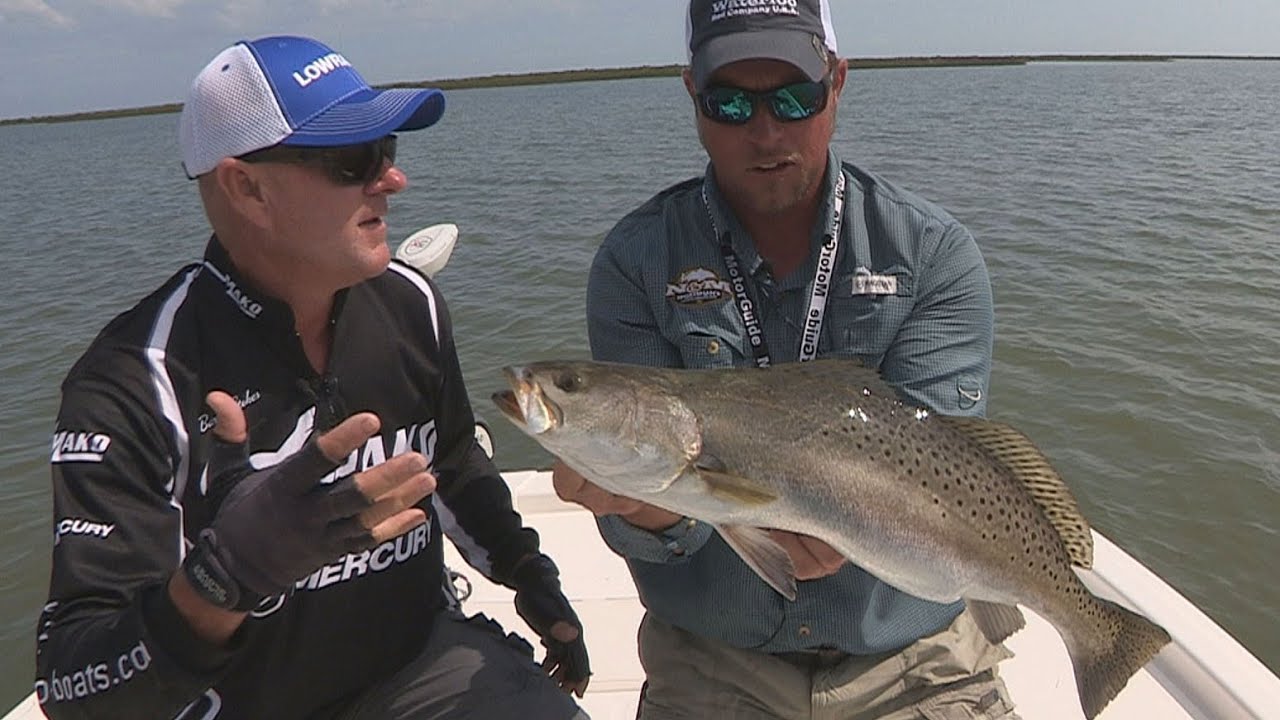 In large open water systems, speckled trout will gather around whatever structure is offered. A good example of this is the shell pads under old gas wells in Corpus Christi Bay and the open water oyster reefs of Aransas Bay.

Nature also gives us a couple of signs that trout are actively feeding. Looking for birds that are “working” and finding “slicks” in the water are both productive, especially in open water. When trout are schooled up and feeding, they will push bait to the top of the water. Sea gulls and other birds will circle above the frenzy and dive into the water to attack the bait fish from above giving a signal to anglers that can be seen from great distances.

“Slicks” are formed on the top of the water when trout are feeding. During an excited state, such as a feeding frenzy, speckled trout will often regurgitate, spilling partially digested fish and oils into the water. These oils will float to the top of the water, creating a noticeable slick film. An experienced Coastal Bend angler can not only see the slicks, they can actually smell when trout are around!