The RDS is a huge venue. So big in fact that even while hosting one of the biggest poker festivals in the country, it can also host an even bigger convention in the hall next door called Divine Mercy** which, shall we say, has a different agenda to, say, a high roller event.

But at the conclusion of that “holy” roller event tonight you couldn’t help wondering what sort of influence divine mercy played in the outcome. At least new champion Sam Panzica will be thinking that tonight as he leaves the RDS tonight, passing several hundred evangelicals while carrying a shiny trophy and a first prize of €375,770.

EPT Dublin 10K High Roller winner Sam Panzica
He got there thanks to a remarkable performance, but also a last hand that will be talked about for some time yet, one that depended upon (are you listening Divine Mercy?) three Kings.After a cagey heads up that had swung between Panzica and his opponent Akin Tuna, Panzica finally got a good hold on the edge he’d worked hard on. Then the last hand came. For Tuna jack-ten, for Panzica, well we’ll get to that.
Akin Tuna
After much time spend swapping chips; the three Kings arrived, together on the same flop. By the river it had given Tuna a full house, which for Panzica, holding the fourth king, must have felt like a miracle, even more so when Tuna called his all-in.
Samuel Panzica
Watching from the rail it was hard to understand how Panzica had contained himself – one of many things perhaps that separate the pros from the giddy amateurs. While the rest of us looked on in wonder, Panzica and Tuna shook hands, both not quite believing how things had ended, but laughing nonetheless.

The other clues came in the rest of Panzica’s performance, a personal best on the EPT, and one fully deserving of the title and silverware. And to think he’d thought about skipping it.

Looked at the 10k field and think I am going to skip. Anyone in Dublin want to get food and go do something fun hit me up #daysoff

Whatever it was that changed his mind (still with me Divine Mercy?) it was a career defining one. While high rollers often play the part of poor relative on what is the last day of the festival – permanently in the shadow of the TV lights and main event stage, it still appeals to players, many of whom stopped by to watch, drink in hand.

Play resumed today with 13 players (full payouts can be found here), the first to go being Diego Ventura. He was followed by Sam Chartier and Christoph Vogelsang, then Jerry Odeen and Rocco Palumbo, who busted in ninth to leave an official final eight.

There was no urgency to the eliminations. The Gods decided there would be double ups first to raise the blood pressure, seven to be exact, with Riess, Arruda, Kitai, Riess again, Adams, Patel and Arruda again, all doubling up before the first of them was sent to the rail.
That would be Arruda, who ran jacks into Patel’s ace-queen, which became a straight on the river. Adams followed a short while later when his ace-ten fell to the ace-queen of Panzica.

William Arruda
Former World Champion Ryan Riess went later, having fought well with the short stack. He found pocket sevens just as Kitai found pocket eights. Not that it did Kitai much good. He busted next in fifth place when his ace-seven was undone by Tuna’s ace-six, which with some good fortune was turned into a straight by the river.
Ryan Riess
Patel got similar treatment, seemingly ahead with ace-ten only to watch Panzica’s ace-eight overtake him on the turn.

Then it was Lebedev’s turn.

Chip leader at the start of the day, the Russian will nurse bruises tonight having taken knocks in the run up to the final table. He lasted until third though, busting with threes against Panzica’s nines, a hand that gave Panzica an edge going into heads up.

Sergey Lebedev
The two finalists quickly agreed to a deal, splitting the money marginally in Panzica’s favour, with €65,770 (and the trophy) left to play for. It meant a first prize of €375,770 to the American, watched to the finish line by the likes of Mike McDonald and Chance Kornuth. Tuna, who let’s not forget had played the game of his career, having been the first person to bust (and re-enter on Day 1) and the last, took away €290,000 as runner-up.

And that was that – another champion, and arguably the most memorable final hand. Three kings bestowing riches on one man. What an incredible story.

It’s not the last story to play out at EPT Dublin. The Main Event continues with play now at the heads-up stage. Follow live updates on the PokerStars Blog.

In the meantime congratulations to Samuel Panzica on a great victory.

** No divine intervention was implied. It was just coincidence.

Stephen Bartley is a staff writer for the PokerStars Blog.

The third and final day of the 2016 PokerStars European Poker Tour €10,300 High Roller saw 13 hopefuls from a 185-entry field return to the tables at the Royal Dublin Society. With the top 27 spots reaching the money, the remaining field was well into the money with Sergey Lebedev in the lead, but the Russian wasn't the man walking away with the title. That accomplishment was fulfilled by American Samuel Panzica to the tune of €375,770.

Lebedev ultimately settled for third place after having already finished 10th in the €10,200 Single-Day High Roller a few days ago.

Panzica and Akin Tuna cut a deal before heads-up play started and left €65,770 and the trophy up for grabs. In the end it was Panzica who emerged victorious and shattered his previous biggest cash of $109,326.

Tuna finished second for €290,000 and more than quadrupled his live earnings to date.

Diego Ventura was the shortest stack coming back for Day 3, and the Peruvian first doubled up with pocket aces against the pocket sevens of Ryan Riess before he saw his pocket queens getting cracked one hand later by the ace-ten of Lebedev when an ace appeared on the river.

EPT regular Sam Chartier finished 12th after defending his big blind with jack-six suited. The French Canadian found middle pair on a queen-high flop and check-raised all in. Tuna called with the superior pocket tens and held up to bust Chartier. Christoph Vogelsang also fell victim to the early run of Tuna, who jumped into the lead by sending his fellow German to the rail in 11th place. Vogelsang defended his big blind with eight-five suited and found a five-high flop that prompted him to check-raise all in. Top 10 online poker sites in india 2019. Tuna had an overpair with pocket sixes, called, and won the hand.

The unofficial final table was set with the elimination of Jerry Odeen in 10th, and, wouldn't you know, he also sent his stack over to Tuna. The story was exactly the same with Odeen defending the queen-jack suited from the big blind and finding top pair on a jack-high flop, only to check-shove right into the pocket kings of his opponent.

Panzica then scored a huge double up after flopping a set of fours in a four-way pot. Lebedev paid off his check-shove with pocket tens and didn't get there. It was this pot that really helped propel Panzica forward, and he gained plenty of momentum.

It was then Rocco Palumbo who fell in ninth place when his three-bet shove with ace-king was snap-called by Panzica, who held pocket aces to jump into the top spot. 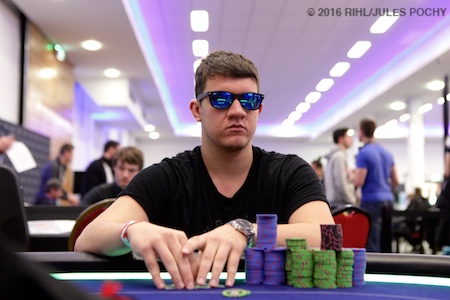 Then it was William Arruda who exited in eighth place, Timothy Adams who finished in seventh, and Riess who took sixth.

For Riess, the 2013 World Series of Poker Main Event champion, he recorded his second high roller cash during the Dublin festival after finishing 13th in the €10,200 Single-Day High Roller. He was eliminated when his pocket sevens ran into the pocket eights of Davidi Kitai.

Despite scoring that knockout of Riess, Kitati was the next to go. He got his stack into the middle of the table by three-bet shoving with ace-seven. Tuna called with ace-six and made a straight on the river.

Emil Patel's run came to an end in fourth place. The American, now based in Finland, was at risk with ace-ten and had hopes of a comeback when Panzica turned over the ace-eight in the all-in showdown. However, an eight hit on the turn, and that was all she wrote.

Down to the last three, Lebedev was the shortest stack. After a passive start, the Russian then open-shoved for 24 big blinds from the button with pocket threes. Panzica called with pocket nines in the small blind, and no miracle happened for Lebedev.

After a quick discussion, the two remaining title contenders agreed to a deal that saw Panzica lock up €310,000 and Tuna €290,000. Tuna got off to an early lead, but then surrendered two bigger pots to become a 2-1 underdog.

On the final hand between the two, a board with three kings on the flop saw Tuna fire all three streets with jack-ten. A ten appeared on the river, and Panzica shoved over the third barrel from Tuna, who called it off with a full house only to get shown quads by Panzica holding king-five.

That's it from the PokerNews Live Reporting team reporting on the Dublin €10,300 High Roller, but there will be plenty more high-stakes poker action from the next stop of the European Poker Tour, the EPT Grand Final in Monaco starting at the end of April.

Qualify for the Next EPT Event

Think you've got what it takes to go deep in an EPT event? Qualify through PokerStars today and it could be your name PokerNews is writing about next! Check out the PokerStars review page on PokerNews to get started today.