In poker, a 'deep stack tournament' is a tournament where players start off with a large amount of chips relative to the size of the blinds. For instance, in a traditional tournament, players might start off with 5,000 chips and blinds may begin at 25/50, with antes being added later in the tournament. Deep stack poker tournament strategy. Deep Stack tournaments have become the standard in tournament poker. When I first started playing in WSOP events, the starting stack was equal to the tournament buy in. Paying $2,000 to enter a tournament, and starting with only 2K in tournament chips, was crazy. Stay loose in SnG games in order to run deeper During Texas Hold’em Sit & Go tournaments, being deep-stacked when getting close to the bubble is quite an ideal condition. It actually takes away most of the stress and it is harder to get busted before the bubble or finish in a bad position.

Deep stack play calls for an entirely different set of skills
than what you would normally implement in a 100 bb or even 150
bb game. The dynamics of every deep stack game will allow
players to get involved in more pots, make trickier plays
post-flop, and will generally leave more room for
maneuverability. Some players will find that they are best
suited for deeper stacked games, while others are going to learn
that the game just isn’t what they are cut out for. Of course,
if you want to be a top winning player, you’ll need to learn
how to win in both deep stacked and shorter games.

The changes between deep stacked and normal games start at
the
pre-flop action. You’ll need to carefully think out each
decision that you make, because every pot could potentially represent
an up or down swing of a handful of buy ins. Because of this, the
first thing that’s required for deep stack play is an ample
bankroll. You shouldn’t be playing in a deep stacked game based
on 100 bb gamebankroll requirements.

For example, if you normally play 2/5 NLHE and the max buy in is $500, $10,000 will
generally be enough to carry in your bankroll (using live
figures as an example). If you then join a 2/5 NLHE game where
the max buy in is $1000, however, you are going to be in awfully
dangerous territory. Players often times make the mistake of
counting realistic bankroll sizes based on the limit of the game
instead of the buy in, but this is most definitely the wrong
approach. Once you have your bankroll taken care of, the next
step is to consider the various elements of actual game play at
deep stacked tables.

In deep stacked games, you’ll have a lot more freedom in
the plays that you can effectively make. Where calling big 3
bets with suited connectors would be a terrible idea in most
games, a deep stack will give you the opportunity to put more at
risk pre-flop for the potential to win a massive pot post-flop.

Position is important no matter what type of game you are
playing, but its importance is magnified when you are playing
with several hundred big blinds. A good player will be looking
to play in as many big pots as possible when they have a
speculative hand at a deep stacked table. In fact, the more
abstract (yet playable) your hand is, the more likely that you
are to win a big pot with it. Hands that are normally huge, like
pocket kings or AK, won’t have nearly as much value in deep
stack games. The reason for this is that you need a large
portion of the money to go in pre-flop in order to really make a
lot of money with big starting hands.

Because you’ll be playing with hundreds of
big blinds, however, this will be all but impossible barring
a set up hand or your opponent attempting to make a play. Of
course, you still want to play these hands, and you should be
working even harder to get as much money in pre-flop as
possible. At a deep stacked table, getting a player to pot
commit to any hand will be far from easy, so don’t feel like
your opponents are as attached to a hand as you might be. 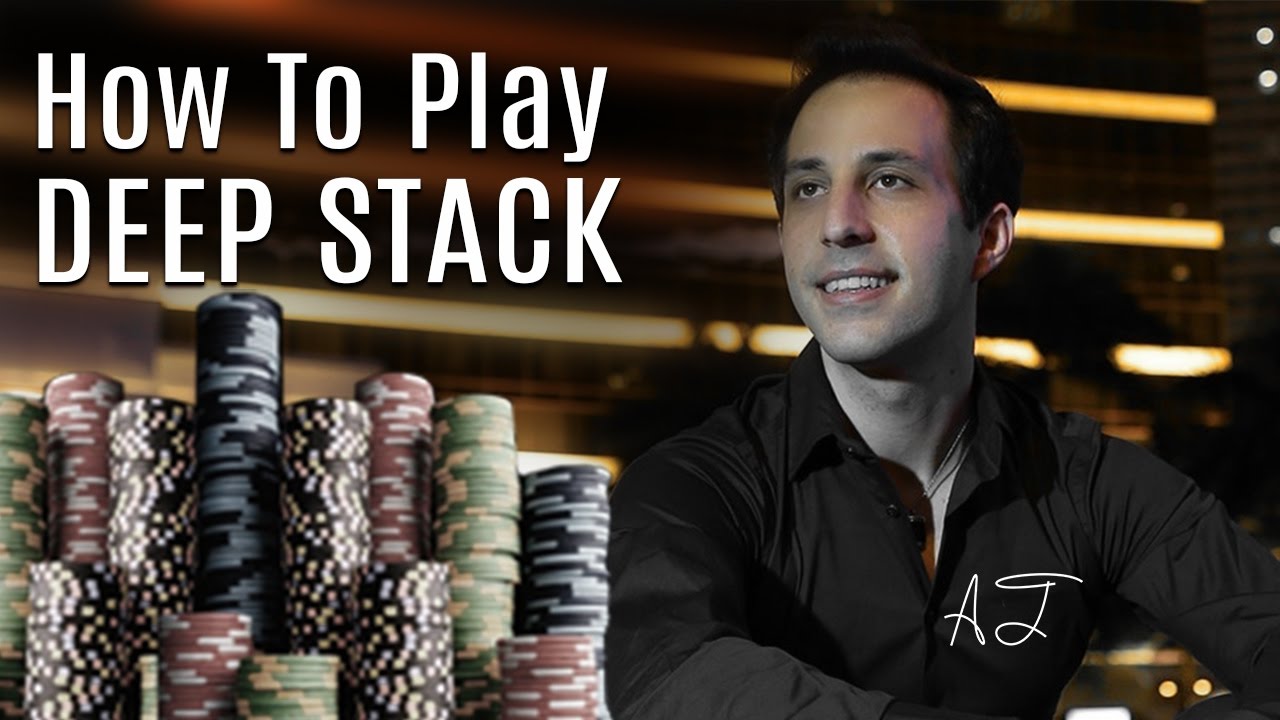 Post-flop adjustments are virtually unending in deep stacked
games, but some areas of concern are more pertinent than others.
For example, draw type hands are going to come up an awful lot
in these games, especially when you are looking to play more
pots pre-flop with speculative hands than you normally would. As
a result of this, you’ll need to be prepared to maneuver your
way through many tricky spots with draws, which often times will
mean a lot of money is on the line.

Passive play is generally less optimal in a deep stacked game
than it is in a regular game. The reason for this is that you’ll have the ability and the chips required to push your
opponents off their hand. Many players tend to become more
apprehensive when they begin to compile a big stack. They don’t
want to make a false step and wind up losing what amounts to a
handful of buy ins. Because of this, the best strategy is to
constantly apply pressure. This is an approach that is valuable
in just about any NLHE game, but more big blinds means that you’ll have more firing power.

There are three primary types of hands that you’ll flop: a
strong made hand, a draw, or nothing at all. Since mediocre
hands tend to play themselves, they are being discounted in this
discussion. Now, in deep stack play, think about what you want
to do when you manage to flop a big hand. It’s impossible to
generalize the single best strategy since there are so many
variables involved, but there’s one thing that you should be
doing each and every time.

Planning ahead is absolutely critical
to your success in deep stack games. Often times when you are
facing an aggressive opponent, you’ll be able to let them bet
into you and manage to win their stack. In deep stacked games,
however, you will need to figure out a way to get them to put in
more chips, since three bets usually won’t mean all of their
money. This is a very broad strategy, but don’t be overly
passive in games where you are sitting with a big hand and
several hundred big blinds. You’ll win some big pots, but you
will also be sacrificing an awful lot of money in the process.

Draw heavy hands are where you’ll encounter a lot of swings
in deep stack play. You’ll be forced to make some plays that
are quite risky, but this is really the only way to do it. You
can’t be afraid to put pressure on your opponents. There’s no
time that you’ll be able to squeeze out more fold equity with
drawing hands than when you are playing deep. Be aggressive,
make moves, and don’t be afraid to get your entire stack in the
middle. With this in mind, you should always make sure that you
aren’t being reckless with your chips, because there’s a very thin
line between maniacal play and genius play.

When you totally brick a flop in a deep stacked game, you’ll still have multiple opportunities to take down the pot.
Just as you can make more plays and raises with draws, missed
hands too will allow for room to steal pots away. The one thing
to consider when you try to steal a pot, however, is that you
are potentially walking into a big mess should you end up going
to the turn.

If you felt you could steal away the pot on the
flop, that’s perfectly fine, but this doesn’t mean that you
need to continue firing away on the turn and river as well. Be
aggressive and very precautious at the same time when you have
nothing and are trying to make a play. In shorter stacked games,
making plays is something that should involve minimal risk (at
least on the flop), but in deeper stacked games there’s almost
always more inherent risk involved simply due to how much money
is in play.

Stay loose in SnG games in order to run deeper

During Texas Hold’em Sit & Go tournaments, being deep-stacked when getting close to the bubble is quite an ideal condition. It actually takes away most of the stress and it is harder to get busted before the bubble or finish in a bad position. However, that doesn’t mean there are no risks and that things can’t change. It is important to implement an effective strategy when you have plenty of chips so your game doesn’t tighten up as it frequently happens.

The main problem with being deep-stacked is that players are somehow afraid of screw up in one hand or even become someone other people take advantage of. It shouldn’t be anything like that. If you have a lot of chips there is nothing to fear. One thing to consider is that the bubble doesn’t really end quickly; it can actually last a little bit because most players are trying to hold on to their chips. If you get on this ride, in a matter of 3-4 hands eating your blinds, you won’t be playing with a deep stack anymore, which brings again the concerns about the bubble situation.

The best approach will be to play aggressively, and there are several ways to do it, though some ways are better than others. It depends on how deep your stack is or your position in front of opponents. One way to do it is to show any two cards whenever you are the first one to take action because other players can’t call you light. This is a good option to try when the shortest stack is not in the hand because no one wants to be the first to fold and get busted before the shortest stack. Another great idea is to try three-bet, which can also bring a lot of benefits if you shove against someone who opened first.

You never want to be timid if you’re deep stack on the bubble. Exploit every opportunity you can and take control of the game in order to move into the cash.