The people were announced as the latest inductees into the Poker Hall of Fame. Chris Moneymaker and David Oppenheim were revealed to be the people that won the most votes and are the 2019 honorees.

WSOP host on ESPN, Kara Scott, announced the names on Monday night, July 15, during a break in the action of the 2019 World Series of Poker Main Event final table playdown. She did so with commentary from Phil Hellmuth and Maria Ho.

Moneymaker and Oppenheim are the 57th and 58th names added to the Poker Hall of Fame, following last year’s induction of Mori Eskandani and John Hennigan.

The final list of 10 nominees for the Poker Hall of Fame in 2019 came from a public process during which time anyone was welcome to submit names and express support for those in the poker community that they felt should be honored.

Over the past several weeks, the final decision was made by a select group of people given the chance to vote. That group consisted of the 30 living Poker Hall of Fame members and a 21-person panel of poker media and industry members. The people on the panel have not been revealed.

The WSOP Governing Council tallied the votes and notified Moneymaker and Oppenheim of their wins.

Typically, a person is inducted into the Hall of Fame for their long history of poker play. Qualifications for this type of inductee includes playing against acknowledged top competition, playing for high stakes, playing consistently well and gaining the respect of his peers, and standing the test of time.

However, non-players can also be inducted by contributing to the “overall growth and success of the game of poker with indelible positive and lasting results.”

Moneymaker qualifies for the latter category but also fits much of the criteria from the first as well. His 2003 WSOP Main Event victory is widely regarded as a pivotal and historic point in poker history, one that spurred the poker boom and attracted millions of new players to the game.

The American player has collected more than $3.8 million in live tournament earnings to date, though he also plays regular cash games and online poker. He is, however, most recognized for his 2003 WSOP Main Event win for $2.5 million.

Since that time, Moneymaker has won and final tabled numerous poker tournaments of all sizes around the world, most recently making the final table of the PartyPoker MILLIONS Las Vegas this summer. His ninth-place finish was worth $80K.

Moreover, Moneymaker has served as a PokerStars ambassador since his 2003 win, traveling the world to represent PokerStars and poker itself. He submits to photos, signs autographs, and interacts with fans via social media on a daily basis.

Meeting all of the qualifications for a player to be inducted into the Hall of Fame, Oppenheim easily qualified. He has earned nearly $2 million in live tournaments throughout his career, though he has been and remains mostly a cash game pro.

Interestingly, it is mostly for his cash game acumen and career longevity that he was voted in to the Hall of Fame, as the only tournament win on his record are from a Full Tilt-sponsored invitational event in 2011 in which he won A$250K. He has made some final tables, several significant ones at the WSOP, but he is most known in the poker community for his high-stakes cash play and mixed game skills.

Congratulations to the newest members of the Poker Hall of Fame, @CMONEYMAKER and David Oppenheim.

David Oppenheim is an American professional poker player. He was born on March 7th, 1973 in Los Angeles, CA.

Oppenheim has mostly played live cash games during his career. He’s a regular in the world famous high stakes cash room at the Bellagio, Bobby’s Room (now renamed Legends Room) where he played stakes as high as $4,000/$8,000. He also appeared on the classic poker TV show on NBC, Poker After Dark, where he played $100/$200 NLHE cash against the likes of Phil Ivey and Tom Dwan.

Despite mainly focusing on cash games, he has some impressive tourney scores as well. He has nearly $2 million in live tournament cashes, which includes two victories from the 2011 Aussie Millions.

In 2019, he got inducted into the Poker Hall of Fame, thus earning him his rhyming nickname “Hall of Fame Dave”.

Oppenheim grew up in California, with parents who avidly played poker to supplement their income from their office supply business. Naturílly, the young Dave Oppenheim took a liking to the card game as well. He recanted his journey into professional poker in a 2010 profile piece on him by Cardplayer Magazine.

He started playing live cash games at 16, underaged, at the Bicycle Card Club (now known as the famous Bicycle Casino) while constantly getting into arguments with the security staff about his fake ID.

Oppenheim originally didn’t plan on going pro. He attended Cal State Northridge college while playing $10/$20 Limit Hold’em on the side to earn some cash. However, he quickly realized that he can make serious money at the poker tables.

This could only end in one way: after his sophomore year, at age 19, Oppenheim dropped out of college to pursue playing poker professionally. He’s been an elite poker pro for over 20 years now.

Oppenheim’s Hendon page shows $1.991 million in live tournament earnings. That sum is the product of cashes in 29 different events over the course of 18 years. Concrete slot in fence posts post.

His live tournament resume is even more impressive given the fact that he has always put most of his volume into live cash games during his career.

The first recorded cash on his profile is from the 2001 World Series of Poker. The first time he made a live tournament score for over $100K was in September 2003. He finished 3rd in the $5,150 NLHE Championship event at the WPT Borgata Poker Open and won $117,500. His final table featured 2001 WSOP Main Event champion Carlos Mortensen and 2-time WSOP gold bracelet winner Jennifer Harman.

His biggest live tournament cash outside the WSOP comes from the 2011 Aussie Millions. In January 2011, he took down the Full Tilt Poker Invitational Shootout freeroll event for A$250,000 (which equaled $247,255 at the time).

David Oppenheim is yet to win his first WSOP gold bracelet. However, that doesn’t mean that he’s without any impressive results from the World Series.

At the 2010 WSOP, he made it to the final in the biggest mixed game event in the world, the $50,000 Poker Players Championship. He eventually busted in 3rd place for $603,348, which is the biggest single live tournament score of his career to date.

He got knocked out by the eventual winner Michael Mizrachi, who went on to win this prestigious event two more times.

Overall, Oppenheim cashed in 10 World Series events for a total of $1.111 million combined. 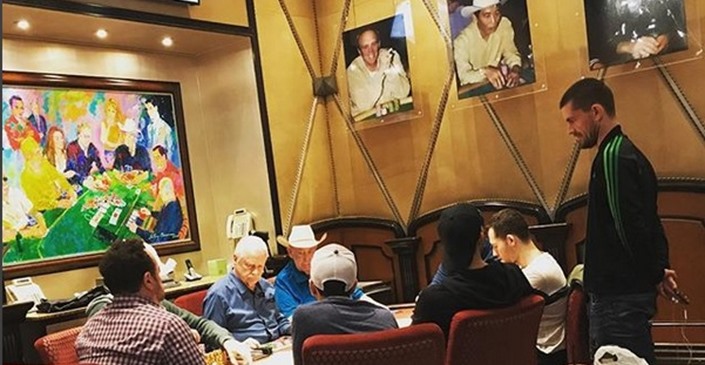 As we wrote earlier, Oppenheim started off as a Limit Hold’em cash player in California. Back then, before the Moneymaker boom, Limit cash games were a lot more common than No Limit cash games, so there is nothing unusual about his game of choice.

Oppenheim stuck to cash games as the primary focus of his career throughout. He eventually made it into the highest stakes games ($4,000/$8,000 and higher) held at the famous Bobby’s Room (now renamed Legends Room) at the Bellagio.

As a testament to what a true grinder he is, Oppenheim even spent his Christmas Eve in 2019 playing cards in Bobby’s Room. Another regular in the joint, Gus Hansen posted a video to his Instagram about the festive $1,000/$2,000 PLO session.

He also appeared on shows where he played live cash on camera multiple times.

Oppenheim was featured in the last two episodes of the original run of the classic TV show Poker After Dark which aired in November 2011. He played a session of $100/$200 NLHE cash in a 6-handed line-up with Tom Dwan, Phil Ivey, Patrik Antonius, Eli Elezra, and David Peat.

In February 2009, he caught up with Cardplayer Magazine for a brief interview for their YouTube channel. He was asked about the worst downswing he’d ever had.

Oppenheim revealed that in the private cash game hosted by adult magazine mogul Larry Flynt, he lost 12 sessions in a row. His losing streak culminated in a $1.8 million loss in a rather soft game.

Oppenheim used to play under his real name as his screen name, “David Oppenheim”, on the late online poker room Full Tilt. He was one of the sponsored “Full Tilt Red Pros” who would have their screen name written in red font in the client.