Cambodia is becoming one of the most popular destinations for casino gaming in Asia. Because of this, casinos in Cambodia are growing and playing a bigger part in the economy.

Every year, tens of thousands of foreigners, mostly from China, Vietnam, and Thailand, visit the 150 casinos in Cambodia. Cambodia hosts the most casinos in Southeast Asia, followed by Myanmar, Laos, and the Philippines.

Thailand, Laos, Vietnam, and Myanmar all have laws banning their citizens from gambling. This has allowed Cambodia, which also has anti-gaming laws on the books, to become a regional hub for betting.

The casino market is worth a whopping $51 billion in Asia. Casinos in Cambodia are responsible for a large chunk of that sum.

Indeed, gaming establishments contribute hundreds of millions of dollars to the Kingdom’s tax revenue every year. However, they have also been blamed for an array of social problems.

Casinos in Cambodia saw a huge jump in 2018

Over the course of 2018, the government granted 52 gaming licences to casinos in Cambodia. This brought the total up to 150.

This figure represents a 53% increase from 2017 when the Kingdom only had 98 casinos. Increasing demand, especially from record numbers of Chinese tourists, has been cited as a reason for the growth.

More than 1.6 million Chinese tourists visited Cambodia in 2018, accounting for 26% of all foreign arrivals to the Kingdom.

Nearly 90 of the 150 casinos in Cambodia are located in coastal Sihanoukville. Poipet on the Thai border, and Bavet near Vietnam each host more than 10 gaming venues.

With 1,658 rooms and suites, NagaWorld in Phnom Penh is the largest casino in Cambodia. NagaWorld is a subsidiary of NagaCorp, which was given exclusive rights to operate the only casino within 200 km of Phnom Penh. That deal is valid until 2035.

Is gambling legal in Cambodia?

Save for a few exceptions, gambling is illegal in Cambodia under the 1996 Law on the Suppression of Gambling. However, the ban only extends to Cambodian citizens.

Locals are allowed to buy into five privately-operated national lotteries. Up until 2009, Cambodians were allowed to use slot machines. This practice was then prohibited by the government. Gambling-related violence was cited as a cause.

Many inside Cambodia have noted that enforcement of the gambling ban is somewhat spotty. Yet, by the letter of the law, violation of the ban can lead to a fine or even jail time.

Is Cambodia the next Macau?

Supporters of Cambodia casinos often say that the increased tax revenues more than make up for any negative impacts. Some claim that gaming taxes were instrumental in the economic prosperity of both Singapore and Macau.

Or Saroeun, Preah Sihanouk provincial hall spokesperson, told the local media that more casinos in Cambodia will be good for the economy.

According to him, there will a bigger demand for products and services that vendors, businessmen, and others will just be happy to meet.

“It also means more money for the government’s coffers,” he stressed.

The annual licence fee for Cambodia casino operators is pegged at $40,000. Casinos contribute more than $50 million annually in tax revenues.

Some figures say that gambling is indirectly responsible for contributing more than $2 billion to Cambodia’s economy. The government has set a target of $56 million in revenues from casinos for 2018.

Proponents say that Cambodia casinos bring more employment opportunities and increase the value of land for sale in Cambodia. 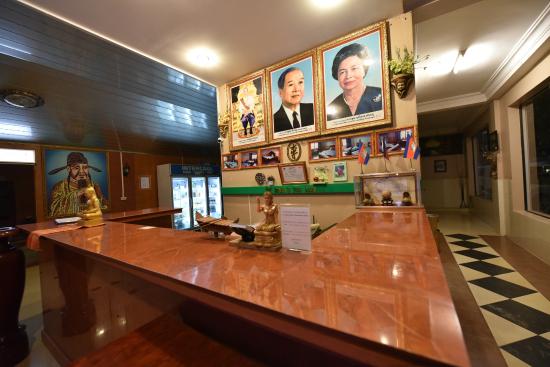 Nagaworld is the only large landed casino in Phnom Penh and serves as a landmark for many residents of the city. Apart from its expansive casino floors, Nagaworld has a hotel, events centers, and a commercial area.

Galaxy Casino is a relatively new hotel-casino in Krong Poipet having only opened in mid-2019. It's popular among Thai border crossers.

DNA Star Vegas casino is one of the oldest standing hotel-casinos in Poipet and is popular among Thai and Chinese gamblers in the city.

The mere mention of casinos often generates controversy. Countries such as Pakistan, China, Mexico, Brazil, Thailand, and Ethiopia don’t have a single casino within their borders.

In countries where they are present, casinos are often heavily regulated.

Many medical bodies across the world have recognised the problem of compulsive gambling.

There have been reports of both foreigners and locals in the Kingdom who have resorted to crime because of their addiction to gambling.

Chan Sey, Executive Director of the Affiliated Network for Social Accountability (ANSA), said the increasing number of casinos in Cambodia should not be a reason for optimism.

“The gambling business is not good for all of us. This is a worrying trend,” he declared.

Casinos, according to him, are not always good for a country and its people. He cited money laundering, human trafficking, and social problems as the most likely negative effects arising from a growing gambling industry.

Since most of Cambodia's casinos are in Sihanoukville, many are curious what it's like inside. They cater to mainly Chinese patrons. So, are there Chinese games? Do they play poker?

Here are some quick facts about Sihanoukville casinos:

Map of all major Cambodia casinos

While landed casinos definitely made visiting Cambodia more intriguing, the country's online casino industry was growing fast behind the scenes. Primary places online casino operators established their operations were in Sihanoukville, Krong Poi Pet, and Krong Bavet. The most prominent of these locations was Sihanoukville as the burgeoning port city was already home to big casinos and a host of large commercial property developments that had the capacity for modern conveniences such as large office spaces, high-bandwidth internet, and centralized airconditioning.

It was noted by international news outlets that Sihanoukville owed its fast expansion not just to landed casinos, but online casinos as well. A large portion of their workforce employed Chinese workers as a majority of these online casinos catered to online casino players in mainland China. The arrival of this large workforce was felt the most in Sihanoukville's property market as rental prices skyrocketed in a matter of months.

In the last few years, Cambodia has been trying to reform laws governing gambling and related activities. In 2014, legislation was proposed that would overhaul the current regulations. The proposal was meant to generate more state revenue while also attracting more visitors from around the globe. This would effectively double the tax rate up to 5%.

Proponents of the measure saw their effort come to fruition when, in 2019, the Cambodian government announced that it would no longer be renewing online gambling permits for 2020. Operators who still had their licenses that year will be given till the end of their license to operate within the Kingdom. It's important to note that the decree only covered online casinos operators; landed casinos, with proper permits, were still allowed to operate.

The exodus of many expatriate workers, largely Chinese, was estimated to be in the hundred of thousands. The immigration office estimated that over 400,000 Chinese nationals left Cambodia by January 2020 - the time when law enforcers cracked down on illegal operations.