It’s hard to talk about modern television without giving at least a passing mention to CBS’ megahit sitcom, The Big Bang Theory. First premiering in 2007, the show has become perhaps the most successful show on broadcast television, and has already completed 10 seasons, with at least two more on the way. The adventures of Sheldon, Leonard, Penny, Howard, Raj, and many more memorable characters have entertained audiences for more than a decade now, and they show no signs of stopping anytime soon.

With such a pedigree of success and wide appeal, it was only a matter of time before The Big Bang Theory by Aristocrat was released to casinos. Sure enough, the game can now be found in many live venues, with two different versions existing on gaming floors today. Filled with bonuses, random surprises, and a seemingly endless set of references to the television show, this is a game that was definitely made with fans of the series in mind.

Overview of The Big Bang Theory Slot. If you have heard of the American hit ‘The Big Bang Theory’, then here is the slot version to the series. Five Pasadena residents in the state of California start in this epic slot jam packed with feature bonuses.

The Big Bang Theory video slot seems to come in two forms: a five reel game and another that is offered in a very tall cabinet and only features three reels. We’ll mostly be talking about the five reel version, but we’ll include a section on the three-reel option below as well. In both cases, you’ll be looking at a cabinet that is filled to the brim with art and pictures of the show, including plenty of cast images. The five-reel game has three reels above the screen and several progressive jackpots – this is a machine you can’t possible miss, which is precisely the point. As you’d expect, there are no play for free versions available; we don’t expect this one to come to online casinos for a long time.

This game uses a format that Aristocrat has been turning to more often in their latest releases, one in which you’ll be playing on four sets of reels at once. All four are the same in this case, and each one has an independent set of 50 paylines for you to play on. Like most penny slots, you can adjust your bet multiplier to change how much you wish to wager on each spin.

As for the game itself, the main thrust is like most other slots: you’ll want to match symbols from left to right across the reels. One difference from other Aristocrat titles is that all of the symbols are thematic in this case. Smaller wins are represented by kitties, Chinese takeout cartons, joysticks, comics, and so on. Of course, the bigger payouts belong to characters, with all of the major cast members depicted. In particular, Sheldon and Lenard both appear in extended versions that can cover two spots on a reel. Meanwhile, the show logo acts as a wild whenever it shows up. Tiki poker chips review. 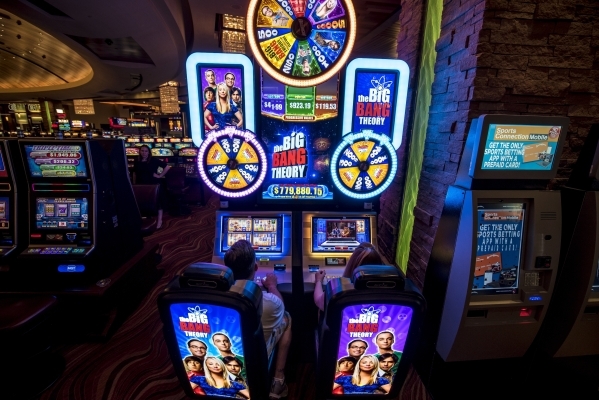 More Features than Atoms in the Universe

We’ve seen games with a lot of bonus rounds and special features before, but few of them offer the kind of non-stop barrage as you’ll see when you play The Big Bang Theory. Some of these are randomly triggered during gameplay, usually with a character from the show popping onto the screen to add some wilds or multipliers. Two in particular stand out from this group: a knock on Penny’s door might lead her to add 10x multipliers to every set of reels, while an Atomic Wheel bonus can earn you either instant coins or a special “atomic” prize (still coins, but more of them).

If you manage to hit three Bazinga scatter symbols on any single set of reels, you’ll get a wheel on the Bonus Wheel. From here, you can once again win a number of instant coin prizes, or potentially trigger one of several bonus games that are attached to the five main characters. For instance, you might explore the Penny Friendship Paradigm (while listening to a rendition of the sleepy kitty song, naturally), go on a scavenger hunt with Raj, or earn some free spins with the Large Hofstadter Collision Feature, where you can choose your level of volatility my mixing spin and multiplier amounts, or take random multipliers if you’re feeling like more of a gambler. There’s also the Cooper Roommate Agreement, which plays free games on a special set of reels, or the Mystic Warlords of Ka’a, which plays out like a card game where you’ll earn instant credits and multipliers as you move through the mini game.

You’ll also have the opportunity to potentially hit the progressive bonus round on the wheel, in which case you can have the chance to win one of three jackpots: the Neutron, Electron, or Proton prizes. You’ll end up in one of three bonus features tied to one of these rewards, and then have a chance to either win the jackpot or smaller payouts.

As we noted earlier, there is a second version of this game: the three reel Big Bang Theory video slot. This monstrous offering comes in a very large cabinet that Aristocrat calls the Behemoth, making this yet another game designed to grab the attention of players on the casino floor. Once again featuring all of your favorite characters, this game offers only five paylines, and is usually played as a dollar slot.

Once again, you can get into a special bonus game if you can hit three Bazinga symbols across the screen. This takes you to a classic Wheel of Fortune style feature in which you’ll win an instant prize based on where the wheel stops. In the version we’ve seen, the top prize here was $5,000.

Just like it’s hard to avoid the huge presence that the show has had on the current television landscape, players on casino floors will find it difficult not to notice The Big Bang Theory video slot. This game feels like it is screaming out to fans of the show to try it, both in its appearance and over the course of its gameplay. There are dozens of different audio and video clips that recap some of the most famous moments from the series, making this one of the more nostalgic slots we’ve played in a while. The bonus games are also very thematic, further increasing the enjoyment for those who know and love the show.

Run of the mill gamblers are less likely to love this game, as all this might be a bit overwhelming – and maybe even weird, if they’re not familiar with the source material. On the other hand, this is probably going to be one of the top performers at a lot of casinos, simply because the series has a ton of fans. And if you’re one of the millions who watch this comedy every week, we think you’ll have a great time playing this machine the next time you’re at a live casino.